Deputy Dir. of Operations, Headquarters North American Aerospace Defense Command, Peterson Air Force Base, CO. He is the son of Commander Dick Scobee, who died in the Challenger explosion in 1986.

Mrs. Stump is the widow of U.S. Congressman Robert "Bob" Stump (1927 - 2003), Representative from Arizona's 3rd District who served from 1977 - 2002 and Chaired the Veterans' Affairs Committee and House Armed Services Committee. His vision for a more focused effort in STEM education in Arizona led to the partnerships in bringing the Challenger Space Center to Peoria, working with local, state and national agencies such as the Challenger Centers for Space Science Education.

The Challenger Space Center of AZ is affiliated with Challenger National, an organization that was created by the surviving families of the Challenger Space Shuttle disaster. The vision of that organization was to create a living tribute to those brave pioneers and visionaries by encouraging students to learn about the wonders of our universe and the world in which we live. The goal to inspire, excite and educate people of all ages is a commitment that the more than 40 Centers throughout the world share. 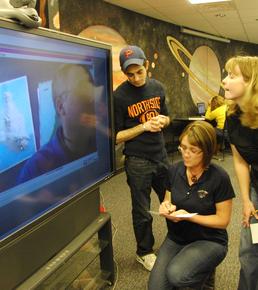